Yesterday, Nintendo released the Wii News Channel, which gives you a news interface and a world map showing where all the stories come from. What I think is different about this product is the fact that you're using the "Wiimote" (rhymes with "remote") to navigate through the interface. This video from YouTube demonstrates the interface:

I'm sure the Wiimote is built on some proprietary technology, because previous applications like a Gyromouse cost a lot more (about $70) than the console remote ($40). I'm excited about technologies like this becoming more affordable and available to consumers and application developers. If the big companies (Nintendo, Sony, Microsoft, ?Apple?) do basic things like news, weather, music, movies, then what can the smaller niche guys come up with? Internet-enabled, beefy video, tactile interfaces could be yet another of the movements that bring home users and creatives out of keyboard and mouse land.

On the same trend is Apple's announcement of multi-touch interfaces on a mainstream device like the iPhone. Honestly, I think they really still have a few tricks up their sleeve as far as using a touch interface with their software, but the handful of tricks the showed us with the iPhone are a good start.

I looked far and wide for a video that would just show off the multi-touch features of the iPhone, but I didn't find any I liked, so instead I decided to show off this video by (I think) NYU's Media Lab on future applications of multi-touch interfaces.

I think my favorite is the sound board they had. Can you imagine a node-based compositing system that uses this interface? If you know anything about compositing for film, you know that your tree can get very confusing even for a simple composite. Being able to "pinch" in to find the node or filter you're looking for would be great. I'm sure there are thousands of other applications just waiting to be written. What would you do with multi-touch?

UPDATE: Here is a neat use for the Wiimote: they use it for gesture recognition, just like mouse gestures, that then trigger a command.

Dear White Wine Bottle,
You and I both shared a cup
Then we were both smashed

I thought of doing a personal videoblog a long time ago, and I figured that I often give people too much credit just for trying, so I thought of calling it "Mr. A for Effort". Check it out.

"The simplest solution is always farthest from where you're standing."
- Ryan Price

If you started walking in the wrong direction.

We've been researching things for Petentials for the last few days, and then as soon as I sit down today, it hits me in the face, or more like sneaks out of my back pocket. It's so simple, but I didn't see it until I thought I had exhausted all other options.

I wonder how easy it is to blog from my new toy... The "killer apps" on this thing are really Skype, IM and musc/movies, but the web browsing was very necessary. Without it, something would be missing. The keys are relly too small for anything more than a quick text, but cest la vie.

I have to push <func> + enter to make a new line... who knew? You also learn the valuue of punctuation and the 102-key qwerty keyboard when you have them taken from you!

Somebody was surfing the boards and user profiles over at Meetup.com looking for go-getters to invite to a seminar about 'monopoly' this weekend in Orlando. The link in my email pointed to a page on Maxcast.com.

Here's the deal: in order to use this revolutionary industry-changing service you have to install a plugin... WRONG! Seriously, the second I see plugin, you had better have "Britney's Hoo-Ha" (to quote Alex Rudloff) on the other end if I am going to install something. Plugins slow down my browser, I don't like too many. USE FLASH PLAYER like everyone else.

You can't even watch the demo without installing the plugin! No flash, no quicktime, no WMV, not even RealPlayer! Even crappy realplayer would be better than a proprietary maxcast player.

Here's a reason to like HelloWorld, a service my friend Jason is selling. It works with your existing hardware and software. I haven't used it, but sometime soon I will be posting a Scoble-style video I recorded with Jason demonstrating the service. This is going on Charlie and Ryan's someday-to-be-announced Inside Orlando video show. The show definitely has a Scoble feel to it, but instead of Silicon Valley, we are going all Central Florida and CFL expats (some people started out here but moved on).

Is that officially too many shows? Maybe. Charlie was also telling me about possibly doing a real estate show with Bill Ferrante from Florida Creatives... I bet John Rife would be on top of that too. Ah well, you all probably stopped reading this post long ago.

I didn't install that plugin, and I never plan to either.

Holy crap, kids. You know how to Happy Hour.

Most of these updates and things will be posted to the FloridaCreatives.com site, because I make a web page for everything. If I sneeze, I buy a domain name for that too.

Still, we had easily 40 people show up to the event last night, with lots of bloggers throwing in their two cents.

I got some video last night that I will hopefully be purposing to Orlando Scene TV. I am still trying to put together the first episode in my head... it always comes out like Rocketboom.

I hope to see all those people and more next month after Film Slam on the 11th.

Making Fiends is Amy Winfrey's hilarious and grim web-toon, which has just been picked up by Nickelodeon for TV. The premise is simple: Charlotte is a polyanna schoolgirl, while Vendetta is her savage mad scientist classmate who terrorizes the school by "making fiends" -- producing huge, terrible monsters. Charlotte makes friends, Vendetta makes fiends. It's great emo-toonery, a la Lenore, with a fantastic, dark visual style.
Link
(Thanks, Martin!)

Hooray Amy Winfrey! She started out as an art school grad student with a penchant for muffins. Now, the sky's the limit. I think this may be the start of the next generation of mainstream kid's entertainment -- Flash cartoons, cheaply produced (web quality) but still entertaining and of high quality on the content end. I wonder if they'll change anything at all... Making Fiends is one of the best web shows around.

The Student of the Game, our pro football podcast, passed 100 subscibers today.

This may be a small milestone for most bloggers or podasters, but you have to remember, we live in Orlando, people! Nobody in this town uses RSS, subscribes to podcasts or otherwise does anything "Web 2.0" worthy! 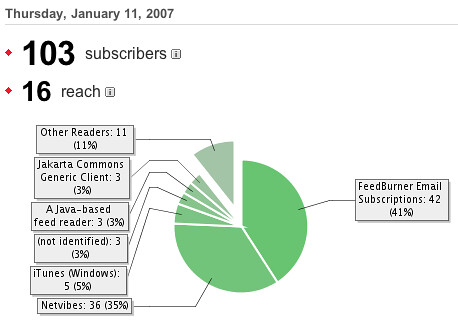 Notice how 40% of these subscribers are via Feedburner Email, and 5 (total) are from iTunes. Also notice that stupid Google only counts as a single hit, so we have no way of knowing if we actually passed 100 a week ago! Damn it to hell!

Still, props to Feedburner for making a kickass stats package that lets me see this kind of stuff.

How many subscribers do you have, and how many of them are using technology that was invented in the 1970's (email)?