I recently posted a comment on Mashable I'd like to share with you, my subscribers. The post was Rise of the Rose Bashers? and it pointed out people who have never used Kevin Rose & company's new IM/filesharing service, Pownce.

At the moment, one of the most popular stories on Digg is entitled: â€œKevin Rose & Pownce Get Pwned by Uncovâ€œ, in which potshots are taken at Rose and Pownce. Further insults are piled on by the Diggers.

The digg audience is almost entirely made up of followers, not leaders. Thatâ€™s actually the business model for the whole damned site! Itâ€™s not a big surprise to me that a service that allows for individuality and groups and privacy would not appeal to the â€œme tooâ€ crowd. Digg users donâ€™t like being told they canâ€™t do something - theyâ€™re spoiled in that way. Thatâ€™s why the HD-DVD code was such a big deal, and the comments changes too. If one person has a contrary idea and they can be persuaded, the Diggers will glom on so they can be â€œcoolâ€. This is how pop/anti-pop culture works.

If this doesnâ€™t apply to you personally, great. Generalities are not ultimatums. There is a sliding scale, Iâ€™ll be the first person to admit to that.

Pownce (without having used it) seems like a â€œfriends onlyâ€ type of service - it will end up having a completely different audience because the service is fundamentally different. Youâ€™re not sharing with the world, but custom groups. This is Facebook vs. MySpace. One is for friends, one is for the public. The type of audience you see on these sites is very different. A service that gave you the best of both worlds was LiveJournal, with friends only, private and public posts, as well as custom groups. This is just that idea with a focus on IM and file sharing.

I think Digg has proven over its 3? years of existence that it's not going anywhere - actually, I wish they'd exapnd the service to include geographic categories - like countries, states, metropolitan areas - Outside.in is currently my choice for that kind of stuff, and Ma.gnolia could be if we could get some people using the service. I think that's the big thing with any of these Web 2.0 ideas - if nobody participates, it doesn't matter how good your service is. I'm working on a social networking site, and I'm planning to make my own local content offering, so I now see that you not only need to convince one group of users but that group ans several of their friends. This is the real trick. How do we do that?

Mark Baratelli and I were talking on Skype chat one Monday and I decided to answer a question of his by recording it to post on my blog... here is the result.

During the discussion, we brought up our twitter streams (Ryan's and Mark B's), video bookmarking with Viddler, and an interesting blog post on Lost Remote, one of my favorite blogs.

One of my top 5 blogs, Lost Remote, often has stories that deal with Orlando - like when something happens at the Tribune company, a lot of times the Sentinel will be mentioned. Apparently, they tried out re-designing the local paper's web site before doing Chicago. OK, but now here's a story about our local NBC affiliate using a Slingbox to show the weather during live TV. Who knew?

So the company has sent out a press release (click below to read). Also, Katz points out that NBC Weather Plus is using Slingbox to incorporate live video from WESH, KUSA, KPRC and WDIV. A write-up in Broadcasting and Cable explains how it works:

WESH, for example, plugged a coax cable right into the Slingbox, which lets NBC Weather Plus look at the stationâ€™s beauty cam at Universal Studios, as well as at two other tower cameras, says WESH Chief Engineer Richard Monn. To be placed on-air, the Sling video has to run through a scan converter, to change it from progressive-scan VGA to the interlace format, before it can be fed as a live source into a production switcher and displayed in NBC Weather Plusâ€™s upper-right corner box. Running the picture small minimizes the hit in picture quality the picture suffers when it is compressed by the Slingbox for Internet delivery.

Re-re-blogging. My favorite kind of reblogging. Apparently, there is also a concept called re"vlog"ging coined by Ryanne Hudson with her revlog. When I heard about it the other day, I said, "Hey, I have one of those!" See? OrlandoVideo.TV

I got tagged with one of these internet Memes by Marc Rapp, and now let's see who I can infect with such a device: Charlie, Mark Baratelli, Beth Marshall, Linwood Sassy, Barry Smith.

Ok Mr. Rapp - let's talk sometime this week. I know you're reading this. 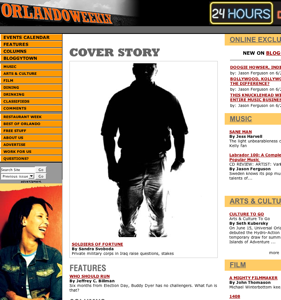 A podcast about how I turned around on the Orlando Weekly. Recorded on my phone by calling my Skype number. I'll have a player for the mp3 here soon.

I'm posting this because there should be an 8th video in this widget by the time you see it. I wish this thing would show the videos in reverse order, and perhaps it will - the first video should be OrlandoScene.TV 03 Taste, the second Heart of Coal, etc.

I've learned through the very useful and very pretty Revver statistics that about 5% of people who see my video play it to the end, and of those about 8% click on the ad. I think 8.16% ain't half bad at all - what I wonder is if the "views" includes people who see the player and don't push play. I don't think it does.

If you haven't seen all 8 of these videos yet, they are more than worth watching. If you're using a feedreader right now, I'm not sure if you can see the player because of JavaScript. You can find my videos on the web at Revver.

Third week of the month, the two events we host come around, and I blog/email/post the hell out of it! First of all is likemind.orl at Lake Eola Panera Bread, that happened already this morning, but it happens every month. Alex Rudloff and Ryan Price (that's me) host this event for... well... anyone in Orlando! The likemind.us fellas in New York got a very nice company named Anomaly to send us some coffee/bagel money, so come for free coffee and good conversation.

Now, for the big news - Florida Creatives Happy Hour is turning 7 months old! Officially our baby is 27 weeks along in its development (but been drinking since day 1? ouch!). I'm really hoping we will be able to get some presence in the local schools once the next year gets started, so I'd like to have a short directed discussion about that, maybe record it, when we feel like we've got "quorum" (enough people to make decisions). John Rife is supposed to be returning from his trip this week, so I'm sure he'll have stories to share. I've also spent the last 2 months on a big recruiting push, and just sent a couple of fresh emails today to local illustrators/podcasters. Not to mention the social networking groups and doing lots of outreach there too. If you're on Upcoming (meaning you have a Yahoo ID), Facebook, VIRB or MySpace, join the groups. Don't forget the mailing list.

If you've never been to a happy hour, all you need to know is BE YOURSELF. We have a very casual atmosphere at Florida Creatives, and we are mostly made up of people who want to make some friends who are passionate about the same things they are. In addition to likeminded friends, we are most of us interested in learning about other disciplines, so we are here to learn as well. Last but not least, there are some of us who want to see this community thrive, and what we can accomplish by getting organized. Admission is free, business cards are plentiful, discussion is honest and friendly. Check us out.

Michael Black, a blogger/webmaster with over a decade of history writing about Montreal Fringe online has decided to lay a verbal smackdown on us at BloggingFringe.com - and I respond in a big way.

Please go read and comment yourself, but for bulletin's sake, here's part I of the transcript:

SlideFlickr.com is, well, they give you embed-friendly Flickr slideshows that work on MySpace - all the Flickr stuff requires JavaScript, so you never see the official Flickr stuff on flash only sites. If Yahoo is smart, they'll get 'em summa this!

I am a fan of the "blog this" button, but again, no MySpace support, but that's not their fault. Honestly, I hate MySpace, but it is too useful right now.