What every small town local bookstore should do

by Michelle Tea. It's a neat little book - half novella and half graphic novel. There are some beautiful illustrations by Laurenn McCubbin in there that were a big reason for my picking up the book in the first place - it just drew you right in, you wanted to know what was up with this young girl from Boston and why she was into being a hooker in the first place - and the back of the book says something about her quitting, but still needing to pay the bills? I'm there.

However Michelle Tea and this book are not the subject of this blog. At least, not directly.

I picked up this indy book at an indy book shop - I was on vacation, visiting Tempe, Arizona, walking to Trader Joe's and Whole Foods, hiking the Grand Canyon, getting yummy sandwiches from the co-op and drinking local beer. And next to the Trader Joe's in the adobe-colored shopping center (really, they all were) was this little book store, Changing Hands. 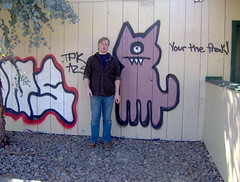 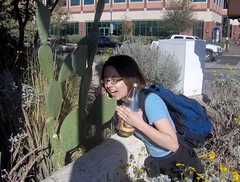 Changing Hands Bookstore, Tempe Arizona, corner of McClintock and Guadalupe. There was a cafe, I think, and there was a section up front with fun games - the kinds of stuff you'd see on the bookshelves of Barnes and Noble next year once they hit critical mass. Like all indy book shops, there was a table near the customer service desk with eye-catching books, new arrivals, and the ever-present signed-or-to-be-signed books. And here was Rent Girl

. I had spent my time there checking out art books - graphic novels, collections of illustrations, and a couple of re-printed sketchbooks. I always love looking at stuff like that, but I don't ever know what I would do with it. Then there was this illustrated storybook, but with naked girls and lesbianism and drug dealing.

I only read a few pages on the plane, it was too naughty. I actually couldn't wrap my head around this book until recently, somehow I feel that by absorbing some women's media I can try to understand the industry a bit better - things aimed at guys are too easy to understand, low hanging fruit - women's music, film and books are another beast.

But I digress. I want to plant a seed at Changing Hands in Tempe and Urban Think in Orlando and the Bookmine in Jacksonville, and all the other places where you feel proud buying a naughty graphic novel. This advice isn't exactly ground-shaking, but I think it makes sense:

Every small town book shop should:

In London I saw a store that only sells Chess and Bridge supplies. They've got the largest selection of that stuff you've ever seen - no big box store could compete. And on the same block is a store that only sells Flutes. I'm told there's a store on the other side of the river that only sells French Horns. Granted, in a big city there is a need for places that specialized, but I think even a small town book store can take some tips from these places. 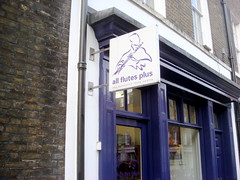 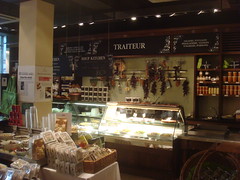 I saw another place that was a grocery, bookstore, gift shop and restaurant all in one. They wouldn't let me take pictures in there, it was so unique. They press their own olive oil.

In a certain way, Stardust Video & Coffee here in Orlando has achieved so much of what's on my list, but the utility of the store, renting movies, was not lucrative enough for them, so they opened up to being more cafe-and-performance-space than video rental space. They've recently added a second stage with a strict "no dry-humping" policy, and they also sell hard liquor in addition to their amazing selection of beers, decent wine, tea, coffee, baked goods and original food.

I suppose if there was a local printer, they could achieve something similar without needing to do the actual printing themselves, but I guess that's part of the point of the bookstore, yes?

As a "video and coffee" establishment, I don't see where Stardust is the last word on video other than the selection, but I always felt like I wasn't smart enough to rent there, that the right to rent a film was reserved for someone with a more cultured taste than I. However, the Thursday night Broken Speech Poetry Slam or the local rock shows they have are completely accessible, and I've played drums on stage at Stardust many times. Maybe that's just partly attributed to my training as a musician, but why do I feel I'm below the film?

I guess I'm trying to encourage these book shops to become the Third Place that we are all craving here in Orlando right now. In the land of corporate coffee, the local coffee shop has evolved, mostly in order to survive. I think the local bookstore has a few more steps to take before they're all grown up.

Which bookstores have you noticed fitting into their niche? 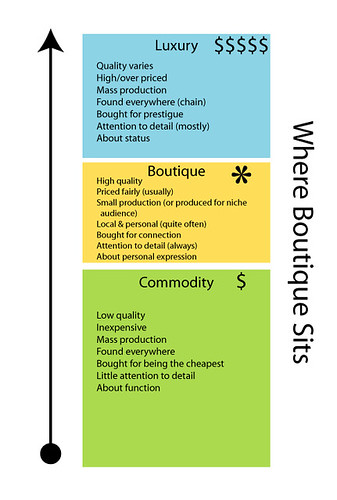 Some people are getting my reference to boutique mixed up with luxury brands. Personally, I wouldnâ€™t be caught dead with Louis Vuitton bag and Iâ€™m sure most Boutiquers wouldnâ€™t be either. The difference, as the diagram suggests (and there are many more differences than I quickly plotted in this image) is the motivations for buying. I said, â€œBought for connectionâ€ because, as Sanford commented in the previous posts comment section:

â€œPeople go out of their way to purchase certain goods - like moleskine notebooks - or buy cheese from specific vendors because it broadcasts something about who they are. This statement can be personal/internal, shared with a small audienceâ€¦â€

The "small shop" concept is the feeling I got at Villandry in London - it was right in the heart of downtown, near the international embassy district, but instead of being generic, they were hyper-specialized. It was the kind of place you'd bring your aunts and uncles who were visiting town, to show off the awesome places that can grown up in your backyard, and they'd sit back and go "I would never buy anything in here, but I'm in awe of the place." That's how I feel at Stardust, that's likely how some folks feel in the front room at Dandelion Communitea, or the co-op area at Infusion Tea in College Park. What does it all mean? How did these people come to create this art, or this custom stationery, or eco-friendly teacups, or press their own olive oil? Why are there hundreds of movies I've never heard of, and how in the hell can they organize them by country and director instead of genre? Who does that?

Boutiques do that. The perfect local bookstore would do that. 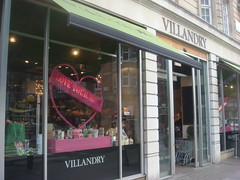 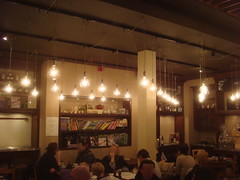 Take a look at people who use open source software, you'll find the same aesthetic. Hand-made, personalized, specific, and powerful in the hands of a well-informed user, but you don't need to be the guy who wrote it to use it or change it. You think there should be a French translation? That's up to you. A sixth checkbox? Hack it in, contribute it to the repository. Make this the best tool for you, and therefore the best tool for folks who know where to look.

I could go on all night. Maybe I'll go on this weekend at BarCamp. But I don't title it "indy bookstore". What is it?

culture. mixed with personal action & initiative. sometimes seeing other people do those things not quite mainstream can make some mainstream folks feel uncomfortable. maybe?

Yes, but I think at your establishment (the aforementioned Dandelion CommuniTEA), you've got lots of the pieces of this formula, but you get slammed at lunchtime with plenty of folks who just want to eat good food. You choose your own level of involvement.