Thanks to my awesome job in Schenectady, I was able to manage traveling to NY the week before Maker Faire. Thanks to a great group of friends and connections, I was able to wrangle a free place to stay in Brooklyn (Williamsburg). There was a truly excellent food market there on Saturday morning, so I stopped in to see people serving cold concentrated coffee, raw kale chips, brown butter cookies, and artisan hash browns, of all things. There were lots more booths, but those were the ones where I spent my money. I made a background sound of the market, which I might try to use in a podcast if it comes up... we'll see.

On to Maker Faire, and the World!

At this time, I've only comlpeted day 1 of the faire - I'm currently uploading photos for this post and recuperating a bit after the party at Resistor... but I'm getting ahead of myself. To begin at the beginning. Maker Faire is such a great place for families - not because many of the exhibitors try very hard to make their booth kid friendly, but because their brains are so plastic and their sense of adventure often rivals that of many of the people making things. Don't get me wrong, the Faire organizers have tons of great activites for kids set up - which is one of the first things I saw upon arriving.

On my way down from the train I ran into some lost people holding MF tickets and I pointed them in the right direction. It was the aunt and uncle of a 12 year old boy named Julian who had come down from Troy - he had made all the arrangements and rode for the first time on the Amtrak by himself to come here. We talked about Blender, Python, Processing and Linux a little bit on the way to the Faire. Once we had our tickets, I had the impulse to hand him a business card, like I would any other new person I just met. I asked him to let me know what he was working on. Hopefully this event inspires thousands more like him, and at the very least creates a generation that is not as afraid of technology, science, math and engineering.

It's really hard to point to things that were cool, because there were just so many! In the craft area (sponsored by Bust magazine, I think) there was a vendor selling space-inspired jewelery. I heard (and saw) a guy using a bicycle wheel with cassette tape on it as a DJ scratching interface, and beatbozing along. Kids would not stop touching it long enough for him to show how it worked. Another sound byte recorded.

Wandered around until I found some robots that can see with OpenCV, including one from IBM that takes readings all around your data center, right next to... 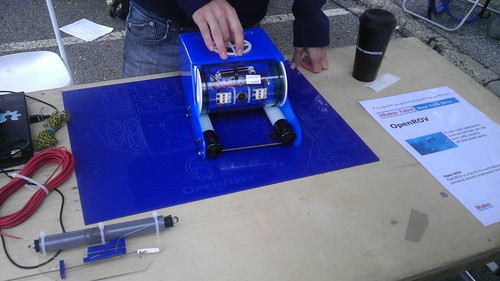 OpenROV, the underwater robot! So cool, and really pretty light - I offered to have them come do a talk at Urban ReThink, at which point I heard "I'd love to, but I'm moving to Antarctica for 3 months". I guess being passionate about ocean exploration has its downsides.

I then started exploring the "Tiny Town" (to steal from Merlin Mann) of Maker Faire - many of the people had the money to produce their product en masse but they were collecting email addresses and determining if they could make a go of it. Lots of cool projects here, like OWL, which is a home sensing device that can run for 2-3 years on a watch battery - sadly it speaks a proprietary signal, but if it improves my life I might be able to allow it.

Then one of the highlights of my day arrived when I was wandering through the Maker Shed tent and I saw Mark Fraunfelder, Matt Richardson, and Eric Chu from Make Zine sitting there playing with a small project. I asked Mark if I could get a photo with him, but once he saw that I had a 3D phone, he asked for another. I told him it really works better with video, so...

Achievement Unlocked! Meet an editor of BoingBoing and Make Magazine, and a really great book.

After that, I saw some more tinytown stuff, including the really tiny town where they did not get a nice tent, like most of the Hackerspaces in New England, and a few 3D printers, designers and robot makers.

So much more to say, but if you want to know more, here are the photos: