What's been going on in my life? 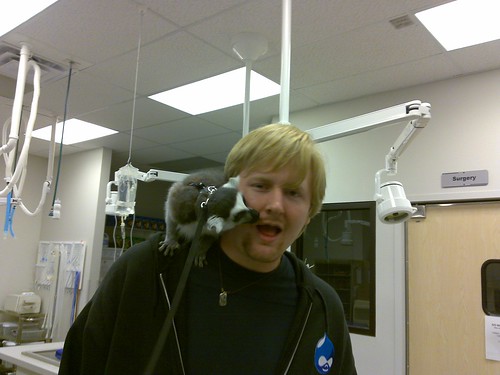 Um... where has the time gone? So many things have been happening lately, I feel like if I were to tell them all here, I'd pass another 2 weeks just re-counting all of them.

After the New Media Think and Drink, (go listen to the audio, and the audio of the 2nd half), I was excited about Community Building and Social Media Consulting even more than I have been in a long time. Also, the Digital Media Banner Center asked me to contribute to their New and Emerging Industries Task Force, which is basically trying to find jobs for journalists who have been laid off recently. I was very excited and honored to be a part of something constructive and forward-thinking. Needless to say, they were able to (once again) gather a group of smart, talented and well-experienced people and get them to talk about changing the world. I love that kind of stuff.

We have been doing lots of awesome DrupalEasy stuff lately - we have great podcasts with book authors and our patented "bookaway" contests, where you get Drupal books just for listening and commenting. I also got the chance to FLY up do to some Drupal Training in North Carolina. It was the first time that someone (specifically, Tomas and Jerry) actually FLEW to come hear me speak. I was proud.

I had a great time and got to try some wonderful craft beers at the Flying Saucer in Raleigh. I also learned that Raleigh has a Drupal User Group, but a bit too late. They actually had their meeting the same night I was headed home. Maybe next time!

The new house is treating me very well, the cats, Mariah and I are all settling in just fine, but Fozzie (my cat) has to stay in his cage, because he's still trying to heal his leg, and he gets in too many fights with Litmus and Loki (Mariah's cats), who are much older and set in their ways. He really likes chasing them around the house and is constantly getting hit in the face while trying to mount the large cat tree in the living room.

It's also really nice working here. I have been "working from home" for most of the past 6 years, but only in this house have I ever had a dedicated room as an office, and an atmosphere that was so conducive to working and collaborating with others. I think getting this house will be one of the things I look back on as being very good for my work and creative lives, in addition to the benefits everyone else gets from owning a house. We already had one big party here, back on Talk Like a Pirate Day, and a few weeks ago, we tested out the Party Patio, the BBQ grill, and the fire pit.

A large part of my last few months was actually dedicated to working with a friend of mine, Kyle, on teaching him Drupal, and updating the website for his podcast, the Student of the Game. That site and Florida Creatives are two of the ideas that have really stuck back from the days when I was doing Liberatr more full-time. Kyle was laid off, and I was trying to introduce him to web site building and freelancing. We got pretty far with the whole idea, but it's not like you can just flip a switch and change someone's life, so he's taken a contract with some place crunching database rows and generating reports. We'll keep working on it, just a bit slower. That's fine, because I need to work too.

Speaking of Florida Creatives, we are inching up on the start of the 4th year of Orlando Happy Hours for creative people. Our regular meetup will take place on the 16th at Crooked Bayou, just like it always does. I've also been trying to delegate some of the responsibility, like website design. Erik Baldwin is a fantastic designer and a good friend, and he's been coming up with some designs based on my rudimentary wireframes, and I've also been adding new features to the site, like the Communties and Meetups page. I'm not sure how this feature will ultimately present itself, but it's already better than a flat wiki page with just text and links. There's nothing stopping anyone from adding new ones, but we're not exactly advertising the feature just yet.

Also this week, I have been having some problems with an old server I keep around for hosting personal sites and sites for friends, so I started the very large task of moving several gigabytes of files over to Amazon S3. Namely, all the podcasts I recorded a few years back, and everything Kyle produced for the Student of the game in the past 4 seasons of football. As far as I can tell, everything is happily hosted by "the cloud" now, and the end users don't know the difference.

One more geeky update, and I'll be through. It's about Twitter, so feel free to tune out now.

Twitter finally added a feature... something useful, and something that would be hard for a 3rd party to add. It's called Lists, and I started making some. They're useful for me, as I'm following 1700 people and my attempts to make the list shorter are really just making me find more people I want to follow, but for a multitude of subjects. One is just plain old technology, which is what my RSS reader used to be for. The next is a collection of the other Twitter accounts I own or manage, and hopefully one day twitter will let me say WHY I made each list one day. The last and most complete right now is my list of Drupal people. I think I'm also going to start one for coworking, but I haven't really done much with it yet.

I'm sure I'm leaving stuff out, but I feel pretty well vented right now. I really need to get to this blogging thing more often...